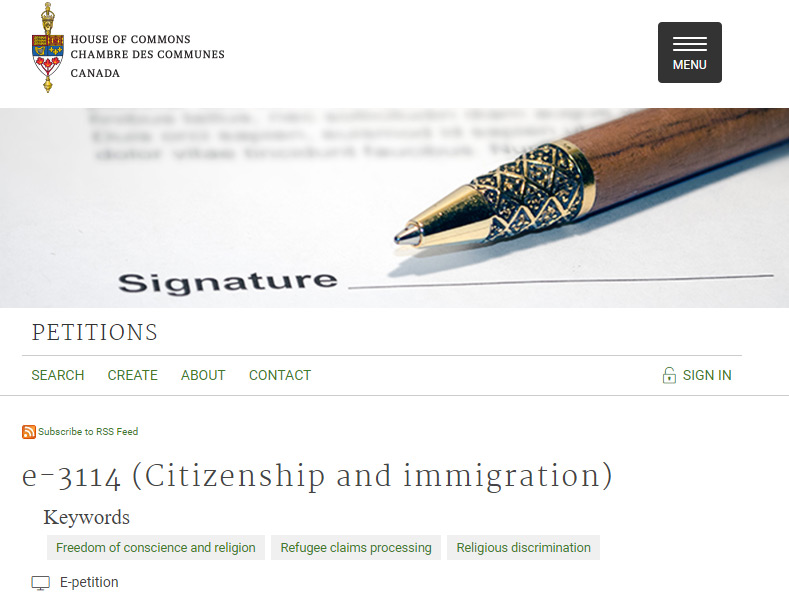 We need you to sign an e-petition for the Canadian House of Commons to support atheists threatened by religious extremists and fundamentalist governments in other countries. These atheists desperately need asylum in Canada because of the imminent threat of serious injury, imprisonment or death. Canadian immigration has expedited asylum requests for religious persons under their Less Complex Claims process. Under this policy, certain refugee claims can be approved with a shortened hearing process. Atheists need to be included in this Less Complex Claims policy along with these religious claimants.

We have submitted an e-petition to the Canadian House of Commons calling upon the Minister of Immigration, Refugees and Citizenship to include atheists in the Less Complex Claims policy. Please click on the e-petition link and then scroll down to the bottom of the e-petition page to click on sign the petition and fill in your information.

This e-petition is co-sponsored by CFI Canada, Humanist Canada, and Secular Connexion Séculière. We have atheist refugee claimants who desperately need asylum. Their claims have been outstanding for over a year even though these refugees face imminent threat of serious injury. The e-petition needs only 500 signatures for our request to be brought up by the Canadian House of Commons. But, thousands of signatures would put even more public pressure on the government to act. Your name on the e-petition can make an immense difference to these refugees. Please click on the e-petition link and then scroll down to the bottom of the e-petition page to click on sign the petition and fill in your information.

The Centre for Inquiry Canada is supporting Omer (a pseudonym) while he waits to come to Canada. In 2011, after a heated debate about religion with a friend, Omer was abducted and beaten by five men. Omer was sexually assaulted, his finger was cut off, and the abductors used a burning cigarette to write Tauba (“repent”) on his arm. When Omer escaped the men, going to the authorities was not an option. Blasphemy is punishable by death in Pakistan.

Eventually, he found his way back home. After explaining to his parents what happened, they disowned him. Omer was forced to move to Karachi where he found work. In his spare time, he and a friend risked all to question the unquestionable. The two men posted questions and controversial discussions on social media.

Early in 2017, the Pakistani Law Enforcement agencies started a targeted operation to arrest freethinkers. A warrant was registered against Omer, his friend, and their social media sites. Omer’s friend was arrested and tortured for 21 days. Another friend, outspoken atheist Ayaz Nizami , was arrested and placed in solitary confinement and is still awaiting capital punishment. Details of police raids and abductions were in the news constantly.

When Omer received a phone call saying, “ We know where you are ,” and threatening to kill him for blasphemy, he threw away his phone, computer, and passport. He deleted all his social media sites and went into hiding. He hid out for over a year. In 2018, Omer approached several activists and gave an interview to Harris Sultan, another ex-Muslim activist. He also approached CFI, which, with Sultan, assisted Omer in leaving Pakistan.

On September 23, 2019 Omer received the good news that he had been recognized as a refugee by the United Nations High Commissioner for Refugees. CFI has connected Omer with private sponsors in Canada and the process of seeking asylum has begun.

Omer is close, but now he needs our help. Please click on the e-petition link and then scroll down to the bottom of the e-petition page to click on sign the petition and fill in your information.