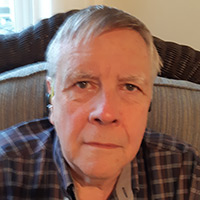 Mike lives in Surrey, BC and is committed to improving human rights. He has been a member of Amnesty International for ten years and the BC Humanists for the last five years. In 2019, Mike founded the Free Thought Humanists in Vancouver.

Mike believes that individuals should not accept ideas proposed as truth without recourse to knowledge and reason. He strives to build his opinions based on facts, scientific inquiry, and logical principles, independent of logical fallacies or the intellectually limiting effects of authority, confirmation bias, cognitive bias, conventional wisdom, popular culture, prejudice, sectarianism, tradition, urban legend, and all other dogmas.

Recently retired, Mike worked as a regional vice president for a distribution company. He is married to Gail Miller, who he met 42 years ago; they have two children who are successful adults.  Mike is an avid chess and bridge player. He enjoys reading the Economist due to its liberal world perspective and focuses on science and reason. Living in beautiful BC, he enjoys hiking regularly.

Join our Community
Support Humanism
Volunteer Now
Become An Affiliate
Sign up to stay in touch!
Thanks for signing up!