How to Make Technology Work for Workers

With Jim Stanford, PhD, Economist and Director of the Centre for Future Work

Much popular discussion about the future of work is filled with breathless commentary on how our jobs are being transformed by machines: robots, artificial intelligence, and smartphone apps. The result could be dystopian (mass unemployment and precarious inequality) or utopian (ample leisure time and freedom from want). But either way, the narrative assumes that technology is driving change. And as the Luddites learned 200 years ago, you can’t stop technology!

This discussion will pop the bubble of technological determinism that infuses so much modern discussion. Technology does not call the shots: people do. The issue is which people make the decisions (about technology, production, and distribution), and in whose interests.

The evidence is not at all clear that technology is even speeding up: at the ground level of the economy, many jobs are as menial, labour-intensive, and badly-paid as ever. If we want technology to lift working and living standards, instead of degrading them, we need to be proactive in setting guidelines for how it is used, and ensuring that its costs and benefits are fairly shared. 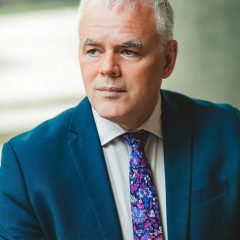 Jim Stanford is Economist and Director of the Centre for Future Work. He divides his time between Vancouver, B.C., and Sydney, Australia.

Jim is one of Canada’s best-known economists. He served for over 20 years as Economist and Director of Policy with Unifor, Canada’s largest private-sector trade union (formerly the Canadian Auto Workers). He is quoted frequently in the print and broadcast media and writes a regular column for the Toronto Star. He is also the Harold Innis Industry Professor in Economics at McMaster University in Hamilton, Canada, and an Honorary Professor in the Department of Political Economy at the University of Sydney.

Jim is the author of Economics for Everyone: A Short Guide to the Economics of Capitalism (second edition published by Pluto Books in 2015), which has been published in six languages. Stanford has written, edited or co-edited six other books, and dozens of articles and reports in both peer-reviewed and popular outlets. He has provided research and advice through numerous federal and provincial government panels and inquiries on economic policy, innovation, jobs, and social policy. Jim is recognized for his ability to communicate economic concepts in an accessible and humorous manner.