Whatever Happened to Saguenay?

In 2018, the British Columbia Humanist Association was notified that a number of municipalities in BC opened their inaugural council sessions with prayer. This was in violation of the Supreme Court’s 2015 ruling in Mouvement laïque québécois v. Saguenay that including prayer in municipal council meetings was unconstitutional and violated the state’s duty of religious neutrality.

In addition to detailing the results of this survey, this presentation explores the particular nuance of municipal prayer in each province. For example, in BC the practice is restricted to inaugural meetings, whereas in Manitoba and Ontario, prayers can be found in regular sessions. The presentation also surveys issues around municipal prayer in general. 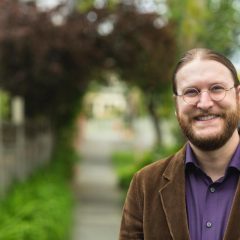 Teale is the Research Coordinator for the BC Humanist Association, the Director of Research for OceansAsia, a marine conservation organization based out of Hong Kong, the Chair and Co-founder of the AccessBC Campaign for free prescription contraception, and a volunteer member of the board of the Greater Victoria Placemaking Network. His academic research examines the strategic use of international law by non-state actors. He enjoys playing hockey, building giant puppets, placemaking, and board games, and lives in Saanich with his partner Stephanie.

You can learn more about Dr. Phelps Bondaroff at his website: www.teale.ca